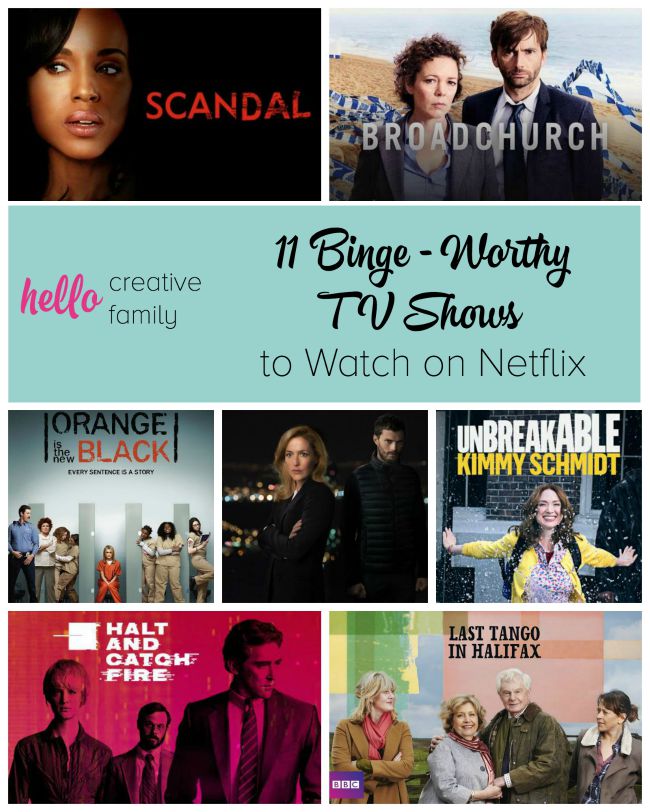 Ever since I watched Lost in giant gulps of frantic viewing, from a purchased DVD, I’ve been loving the benefits of tuning in to watch television shows when I want to … not waiting an entire week as the tension hangs in the air and leaves me wondering. When my kids (finally!) fall asleep, I love zoning out and tuning in to suspenseful and entertaining television shows and Netflix has a lot of them on offer. One of my favourite Facebook posts to answer (and they crop up all the time) is “What Netflix show should I watch now?!” I have a lot to say. So I thought it was time to put together my list of binge-worthy television shows that you just have to watch on Netflix. Let me say “you’re welcome” and “I’m sorry” in advance: you’re welcome for pointing you towards these amazing shows and I’m sorry you are staying up way past your bedtime to finish just one more episode!

Kerry Washington stars as Olivia Pope, a Washington D.C. “fixer” with some racy ties to powerful men in the White House. Trouble just seems to hide around every corner, for Olivia, her friends and for her clients. Seriously addictive television.

Orange is the New Black

This one will make most people’s lists. It was a huge hit in it’s first season. This follows the story of Piper who is admitted to a woman’s prison after being convicted of smuggling drugs (for her former girlfriend).

The rise and fall of Nashville stars, with soap opera-esque story lines of love, loss and all that country heartbreak. The music is an added bonus.

A marine is rescued after years of being in captivity as a Prisoner of War. He returns home to his family but a CIA agent just doesn’t trust him.

This creepy show follows DSI Stella (Gillian Anderson) as she tracks a serial killer, and then gets into the head of the killer himself. It is best watched in big gulps because you won’t be able to stand not knowing what’s coming next!

Tracking the rise of the personal computer, this show follows visionaries as they stumble through an amazing period in our cultural history.

The first seasons of The Good Wife are by far the best (I won’t say why I am disappointed in where it has gone now, but fellow die-hard fans will know what I mean). Alicia Florrick is an attorney returning to work after taking time off to care for her kids, and nurture her husband’s political career. She’s forced into a difficult position when her husband is caught publicly cheating.

The murder of a young boy has rocked a small town, and the lead detective is a complicated man. This is an addictive series as we come to suspect everyone we encounter but aren’t sure of the answers until the very end.

I have a thing for murder mysteries and this has been one of my favourite shows (of all times). Shot in Vancouver (a few feet from where I used to live), this show follows two detectives as they try to solve complicated cases (a new one each season).

After nearly 60 years, two sweethearts re-unite and fall in love all over again. Then comes the messy part of merging their two families. I love a good soap and this one is funny too.

This one is hilarious and a perfect source for amazing one liners. Kimmy is freed from an underground bunker which she retreated to 15 years previous because a cult leader told her the world had ended. She takes off for New York and meets a lot of interesting characters. It’s comedy gold! And created by Tina Fey.

Those are my top 11 but I know there are a few missing that others would argue should be there. So I’ll mention them here too.

House of Cards is a really popular political drama, that I haven’t yet immersed myself in.

Mad Men is now on Netflix, and I know a lot of people really loved this series.

Disclaimer: Netflix provides me with free service and incentives. As always, opinions expressed here are my own.