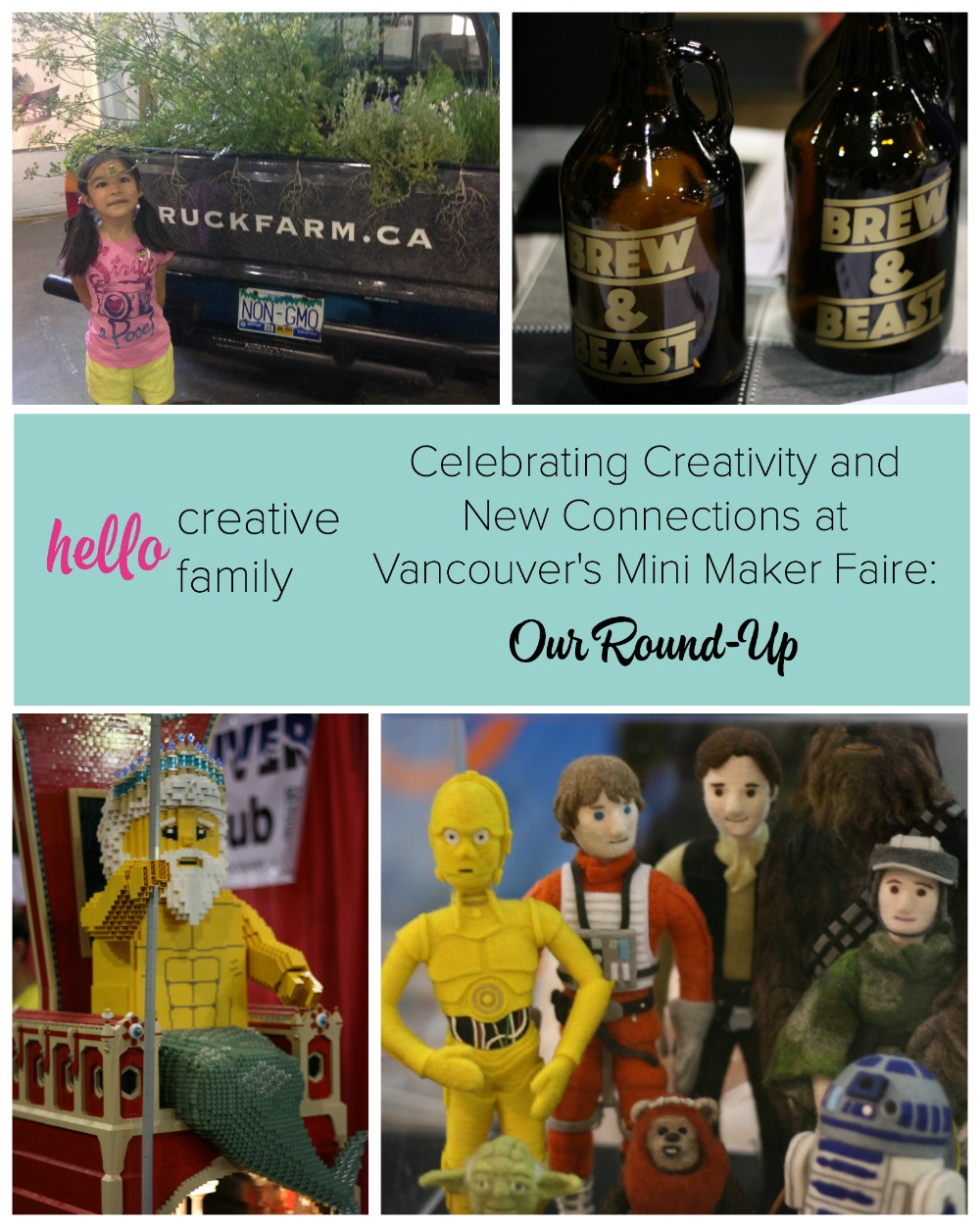 The Vancouver Mini Maker Faire was a few weekends ago and the two of us (with Bean in tow) headed to the PNE Forum to check it out! The 3 of us gals had a great time mingling with other creatives and getting our creative tanks filled! Here are a few of our highlights from the show. 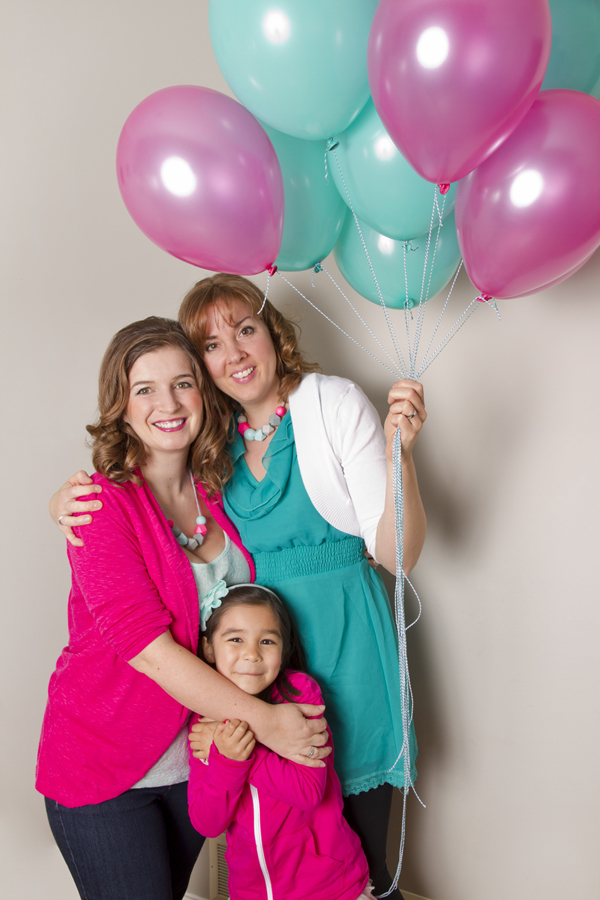 Walking around the Vancouver Mini Maker Faire, with so many fascinating sights, was exciting – from interactive art displays to felt Star Wars characters! The creativity was in the air, and the air was electric.

I went in thinking I would see some fun stuff. I left feeling totally inspired, with a Father’s Day gift in hand, a delicious vegan treat in my belly and a card for a class I have been dying to sign up for. Oh, and a head full of projects I just can’t wait to start.

That’s the best thing about shows like this; people let you inside of their creative flow, and what they show you has been built with so much passion the inspiring part comes from realizing the same high they are on … I can do this! I made that.

So here are my favourite Vancouver Mini Maker Faire memories: three organizations I think you ought to check out. 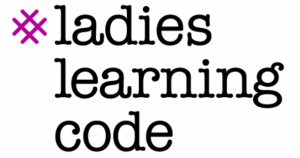 I have had my eyes on this organization, which helps women learn code towards a career, or hobby, in computer programming. Computer Science is a field that doesn’t have many women, and the organization “believes in digital literacy for everyone.” I was so excited to chat with their booth representative, and thrilled to learn that they also offer camps for kids as well (called Kids Learning Code). Ladies Learning Code have chapters across Canada (visit the website to find a chapter near you). Each chapter offers events for adults and children. You can learn more about what’s available in your area, and how to get involved with this great organization, by visiting their website. 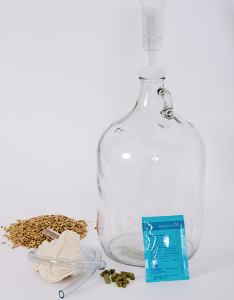 Father’s Day was this past Sunday and I can’t believe I kept the secret right up until the day. Usually I struggle with what to get my husband for special occasions. His hobbies are expensive (think electronics) and his clothing style … t-shirt and jeans (of which he has many). He really isn’t an easy man to shop for! So when we were at the Vancouver Mini Maker Faire, and we stopped at the Brew and Beast booth and chatted with a very passionate trio, I was beyond excited that I had found a gift (reasonably priced) that I knew my husband would love – a complete kit for brewing his own beer at home. We are in the process of moving right now, but my husband said “I can’t wait to brew!” The kit was a great price, and contains everything he needs to brew his own beer at home. 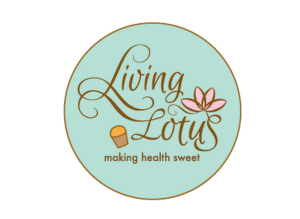 All that walking around can make a girl hungry. Because I have so many food allergies, eating on the go is often a tough thing. I spotted a delicious-looking booth and had to investigate. I invited Crystal’s daughter along, saying “hey they’ve got fudge!” And our eyes popped at the gluten-free, vegan treats on display. I had a macaroon and I insisted Crystal’s girl have some fudge (she told me she had never had any, that may not have been true but it provided the perfect excuse). I support any bakery that makes delicious, vegan, gluten-free and refined sugar-free treats 🙂

I have a friend who helps to organize Mini Maker Faire in Houston. Last year she suggested to me that I should look into Vancouver Mini Maker Faire and see how we could be involved. It was really exciting to be a blog ambassador this year and I was even more excited to bring Bean along with Karen and I to experience it all! Bean and I picked up a Father’s Day Gift for The Hubs (a beer brewing kit and a cure your own bacon kit from Brew and Beast who Karen talked about above) and even ran into a few old work friends including artist, Heike Kapp, who had a booth at the faire.

Here are a few of my highlights from the faire: 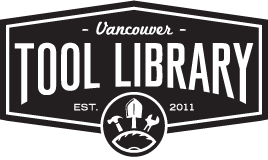 The Hubs and I are constantly coming up with project ideas that we want to make, and then abandoning the idea when we realize we don’t have the required tools to complete the project. I had no idea that the Vancouver Tool Library exists and was so excited to discover it! For $45 a year you can have access to 1758 different tools! From power tools to bike maintenance to gardening equipment, they have what you need for just about any project you could dream up! Perfect for anyone who doesn’t have a huge garage to store tools and/or who doesn’t want to invest a ton of money into equipment for a one off project.

I’m not the hugest lego fan. My son is still too young to be into lego and Bean could take lego or leave it. I didn’t expect to love this booth as much as I did! It could have been how nice the members who were running the booth were– They took the time to have a meaningful conversation with anyone who came up to admire the lego. It could also have been how AWESOME their lego displays were! There was so much lego there. Big, elaborate lego displays with moving pieces in designs that brought big smiles to everyone’s faces. I loved the King Triton display and Bean adored the Doctor Who Tardis display. 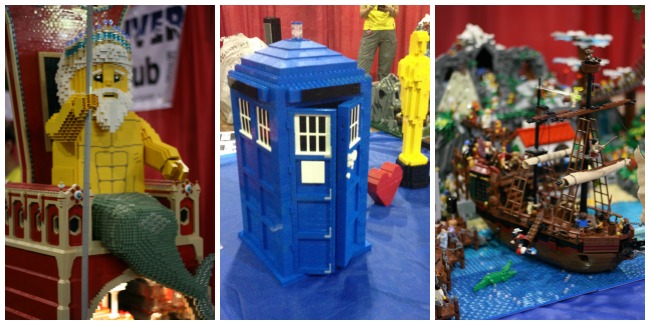 I remember going to see each of the Star Wars movies in the theatre with my family as they were digitally remastered and re-released. I’ll confess that I don’t understand all of the politics and underlying themes going on in the movies… I just love them because they are great movies! I get the feeling that Jack and Holman Wong love the Star Wars movies too… after all, they’ve made their career out of them! Jack and Holman brought some of their felt Star Wars creations with them to the show and they were even felting a Star Wars character at their table! I know how intricate felting is and was completely in awe as I watched the character take shape. I mentioned to Holman that I was seriously impressed with his felting skills and he told me that they offer felting classes here in Vancouver! I’ll definitely be signing up for one in the near future. Hopefully some of their mad felting skills will wear off on me!

Oh and Bean? She had a great time at the Vancouver Mini Maker Faire too! 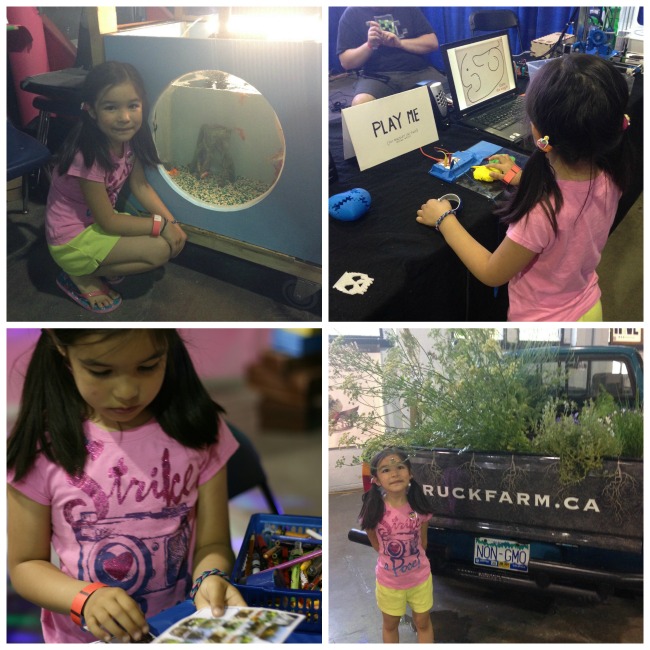 Disclosure: Thank you to Vancouver Mini Maker Faire for asking us to be blog ambassadors. We had a great time. All thoughts and opinions are 100% our own.