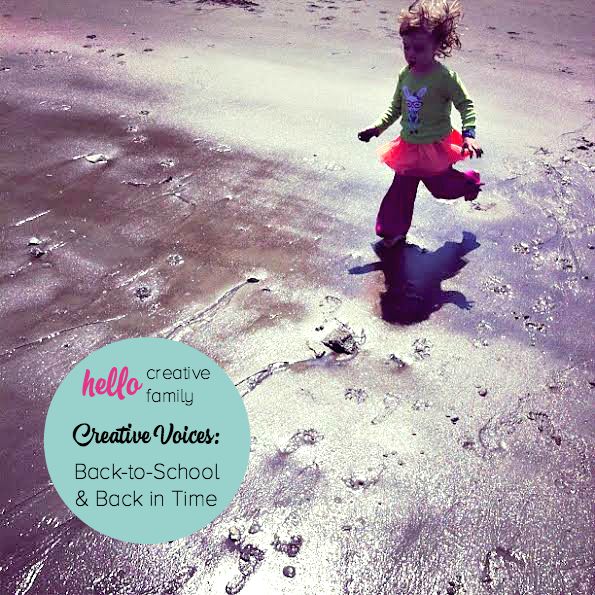 Two years ago I wrote about becoming a “school” parent, when my oldest child started Kindergarten. Unbelievably, this September as we all head back-to-school I become a “school” parent times two, when I bring my daughter to her first day of school. She’s five years old going on 15 and right now I can hear her singing loudly to herself, while dancing around the backyard in her pyjamas and a dress. To say she is spirited, well we can’t find a better word for her amazing uniqueness.

She starts school in a week and, like last time, it leaves me wondering where the time has gone. Again, there is a sense of sadness (for myself) and excitement (for her). Trepidation too.

Eleanor was conceived 6 short weeks from a miscarriage; an amazing convergence of all the right things at all the right time. From the first moment I laid eyes on her, I was deeply in love. She came out of the womb silently, sleepily and rather than screaming red-faced like her brother before her, and like every birth experience I witnessed on television, she saved her lungs for later and chose to curl up on my chest content to just fall back asleep. It was our panic as parents that made the nurse shake her to prove she did have a set of lungs, and she was okay with using them.

We had weeks of quiet reverie, while my in-laws helped entertain my oldest child leaving Ellie and I to spend sleepy days on the couch just getting to know each other. It was there that our bubble was first threatened, when the phone rang innocently and I turned her over in my arms to answer it.

Ellie’s birth test for Cystic Fibrosis had indicated an abnormality; we would have to travel to the University hospital to undergo testing to determine if she indeed had this terrifying disease that affects the lungs, and can shorten a lifespan. Awaiting our test date, I spent terrifying days researching everything I could about Cystic Fibrosis, even watching videos of one young girl’s experience with and ultimate death from the disease. Those days were long and angst-ridden. Our sweet afternoons napping on the couch together were replaced by panicked walks, her oblivious in the stroller, me moving my legs frantically because I didn’t know what else to do. Every terrifying and awful scenario played out in my head and by the time the test day came I had convinced myself of a positive result.

Sitting in that hospital waiting room, I looked around me at the faces of the other parents. Some children had been diagnosed and were awaiting treatments, some parents were in the same position as us, waiting. I tried not to be sad, to feel my heart burst for each and every person in that room.

After the test I swear she clung to me just as much as I clung to her. We awaited the results like that, just needing each other desperately.

Negative. Our story had that sweet ending I was hoping for, but too terrified to wish for. It turns out Ellie, and her Dad as we did further testing, have a gene mutation that, when paired with another gene mutation from a partner, leads to Cystic Fibrosis. I gave her a good gene; she is fine and won’t need to be aware of this until she’s ready to procreate, and she may want to find out if her partner too is a CF carrier.

As she starts school in a week, I remember those days when I felt this threat. Before then, I was guilty of living inside a bubble where I felt as though we were invincible. Sometimes I catch myself there again, just believing that all this sweetness is mine to hold forever. But next week I will send her out into the world. She’ll come back to me after that first day a different person. Someone worn by her own independent experiences. And I’ll have to learn to adapt once again. Hopefully, it will all be okay.